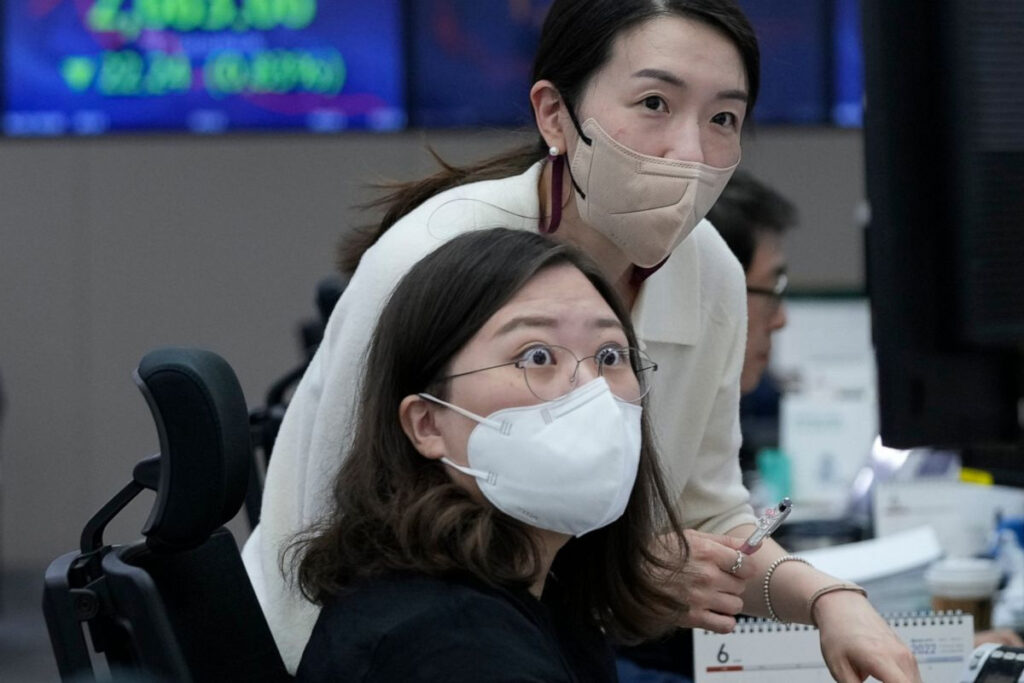 Asian shares declined Thursday, echoing a retreat on Wall Street as investors fretted about higher interest rates and rising coronavirus cases in parts of the region.

In China, strict COVID-19 restrictions are back in Hong Kong as infections rise, while they are gradually being lifted in Shanghai. China has stuck to a “zero-COVID” strategy that requires lockdowns, mass testing and isolation for those infected or who has been in contact with someone testing positive.

“The dampened mood in Wall Street may not provide much positive backdrop for the Asia’s session today, with U.S.-listed Chinese stocks falling in tandem with their Western counterparts overnight,” said Yeap Jun Rong, market strategist at IG in Singapore.

On Wall Street, stocks began their slide immediately after the release of several reports on the U.S. economy, including one showing manufacturing growth was stronger last month than expected. That bolstered investors’ expectations for the Federal Reserve to continue raising interest rates aggressively to slow the economy in hopes of reining in inflation.

“Investors are worried about the Fed meeting coming up, and because inflation is expected to remain stubbornly elevated the Fed probably won’t get away with front-end loading the rate tightening cycle and then pausing in the fall,” said Sam Stovall, chief investment strategist at CFRA.

Daily market swings have become routine on Wall Street amid worries that too-aggressive rate hikes by the Fed may force the economy into a recession. Even if it can avoid choking off the economy, higher rates put downward pressure on stocks and other investments regardless. High inflation is meanwhile eating into corporate profits, while the war in Ukraine and business-slowing, anti-COVID-19 restrictions in China have also weighed on markets.

The Fed has signaled it may continue raising its key short-term interest rate by double the usual amount at upcoming meetings in June and July. Speculation built last week that the Fed may consider a pause at its September meeting, which helped stocks to rise. But such hopes diminished after Wednesday’s manufacturing report from the Institute for Supply Management.

It showed U.S. manufacturing growth accelerated last month, contrary to economists’ expectations for a slowdown. A separate report said that the number of job openings across the economy ticked a bit lower in April but remains much higher, at 11.4 million, than the number of unemployed people.

Wednesday marked the start of the Fed’s program to pare back some of the trillions of dollars of Treasurys and other bonds that it amassed through the pandemic. Such a move should put upward pressure on longer-term rates.

Airlines and stocks of other travel-related companies were some of Wednesday’s biggest losers on Wall Street amid worries that inflation is slicing away their earnings.