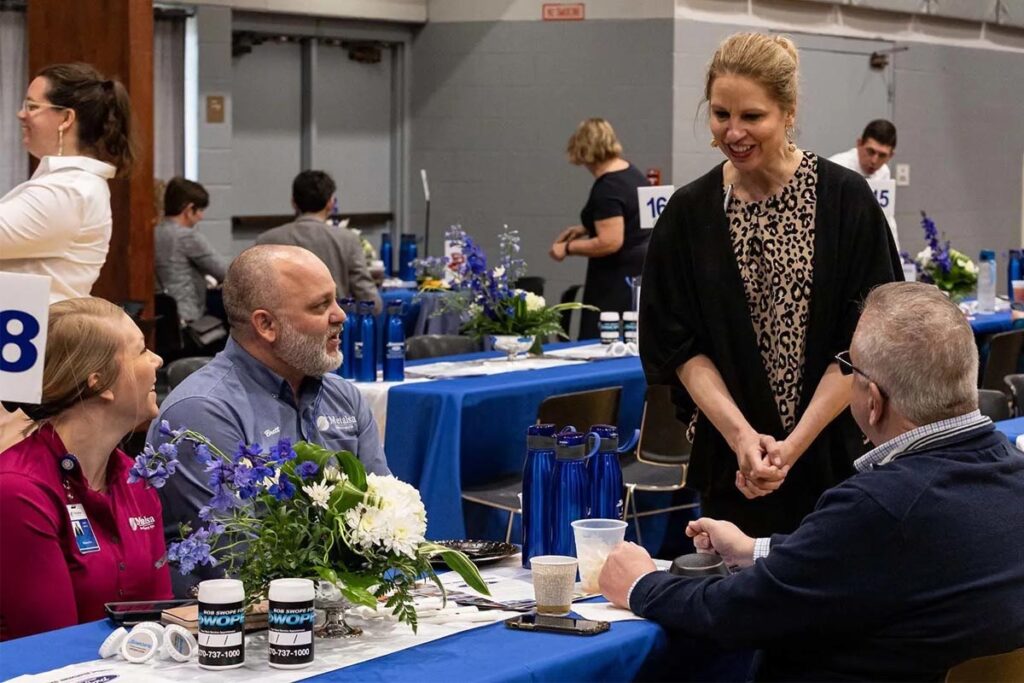 A buzz resonated Wednesday through the Hardin County Chamber meeting, mostly of excitement of the possibilities the BlueOval SK battery park in Glendale would bring to the area.
Area business owners said the development, which will bring thousands of new jobs, would be a boon to the local economy and, hopefully, their business to boot.
“It’s a huge opportunity for all of us and not only in Hardin County but in the region as a whole,” said Brian Kerr, president of Kerr Office Group. “Not only will Ford be here with BlueOval SK but it’s all of the ancillary businesses will happen. As a small business, I think that’s where we’re going to see the bread and butter of it all.”
Kerr said while he believes Ford is working with local contractors to build and supply the park, he also believes the auto industry giant already has some contracts in place.
“I still think most of our business will come from most of the ancillary businesses that come because of it,” he said.
With locations throughout Kentucky, Kerr said the boost Ford will give to the economy will only help his business continue to grow.
“This is going to enhance all that from office supplies to office furniture to copiers,” he said. “The growth of people — the number I heard today is 100,000 to 125,000 more people to the region and E’town is supposed to get 25% of those people — with just that growth alone, people are going to need office products. They’re going to need supplies.”
Kerr said it won’t just be his business that benefits as the need for more restaurants, hotels and homes comes with the growth Ford brings.
“It seems now we don’t have enough restaurants or places for people to stay,” he said.
While Kerr believes his supply chain can withstand the added business, he’ll need more employees in the future.
“You need more people in the warehouse to pick product. You need more drivers to deliver it. You need more customer service to handle the calls coming in and out,” he said. “So we see the biggest growth is having to add more people.”
Caleb Queen, owner of Heartland Hydroseeding, also is hoping to capitalize on the expected growth.
“We’re so excited to be partnered with this community anyway,” he said. “We know how much industry is coming to the area, and we want to provide a service that’s not in this area right now.”
Queen said that while his business is in its infancy, he’s been working in the green industry for about a decade.
As a green company, Queen said his company will provide a wood fiber mulch product to establish turf quicker.
“Being able to meet demand is what we’re really excited about,” he said.
Queen said his company is a good pairing for the green products to be produced at BlueOval SK.
“The product that we offer, the alternative is usually straw matting where you’re introducing plastic to the environment,” he said. “What we do here is completely, 100% wood fiber mulch matrix, where it’s biodegradable and great for the environment.”
While some businesses are expecting business growth, others already are experiencing it.
Michael Childers, principal of Icon Engineering in Elizabethtown, said they’ve been contracted to engineer some of the buildings at BlueOval SK in Glendale and BlueOval City in Tennessee.
“Directly, we’re working for Ford through the primary architect out of Dearborn, (Michigan),” he said. “It’s impacted us directly in that way. We’re doing, right now, about six of the outbuildings in Tennessee and in Kentucky. We’ve seen that right off the bat.”
Childers said his business is not the only one that is benefitting from Ford’s arrival to Hardin County.
“Anything related to the automotive industry is impacted by this,” he said. “We’re also working for Metalsa through another developer in town. They’re building and expanding as a result of the trucks that are going to be using these batteries. That’s another example of industry that’s been impacted by this.”
Eventually, the impact will be felt outside the automotive industry, Childers said.
“I think it’s eventually going to impact everyone, by what (Ford executive Gabby Bruno) said today from the food suppliers to the office suppliers,” he said. “I think it’s going to impact everyone in some kind of way.”