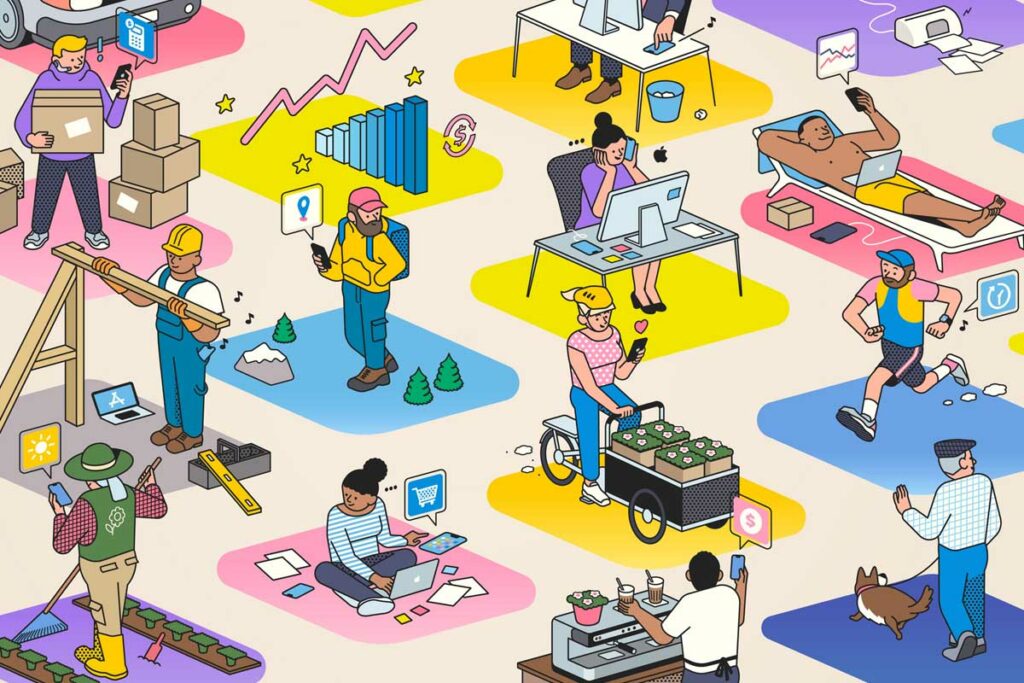 The iOS app economy continued its track record as an engine of economic growth and opportunity in 2021, supporting more than 2.2 million jobs in the US and helping small businesses find more success than ever. The insights come as two new research analyses show the iOS app economy’s support for entrepreneurs to create new businesses, innovate and reach customers through the pandemic, and grow their teams of coders, designers, and creatives — contributing to one of the most thriving and innovative global markets that exist today.

One new analysis, “Spotlight on Small Business & App Creators on the App Store” — conducted by independent economists from Analysis Group — found that developers’ earnings have increased significantly over the past two years. While earnings for all developers have grown, revenue for smaller developers active on the App Store in 2019 increased by 113 percent over the past two years — outpacing the earnings growth of large developers by more than double. In the US, those smaller developers, defined as those earning up to $1 million a year and with fewer than 1 million annual downloads, saw an above-average increase of 118 percent in earnings since 2019.

Additionally, separate, new analysis from the Progressive Policy Institute sheds light on job creation in the iOS app economy. This research examines how the iOS app economy has helped create millions of jobs — ranging from software development to sales, to designers, and more.
Together, this research demonstrates that as more businesses have used apps to reach their customers in innovative ways over the past two years, these digital and hybrid shifts have endured even as COVID-related restrictions have lifted in many parts of the world. These developers and their apps have helped people find new and often lasting ways to collaborate with colleagues, find entertainment, hone their creativity, and connect with friends and family.

In their research, “Spotlight on Small Business & App Creators on the App Store,” economists from Analysis Group examine how entrepreneurs in the iOS app economy have continued to innovate and grow. In total, the research paints a picture of a thriving and dynamic app ecosystem where opportunities and innovations have flourished.

As these developers take advantage of the App Store’s capabilities that make it easy to distribute apps in 175 global markets, about 40 percent of all downloads of apps from small businesses and emerging app creators came from users outside of the developers’ home countries in 2021.

The research also finds the App Store has helped entrepreneurs start new apps and rapidly scale their businesses. To analyze the paths to the growth of developers that earned more than $1 million on the App Store in 2021, the economists looked back at a longer period and found that 45 percent of today’s large developers were either not on the App Store, or had less than $10,000 in earnings, just five years ago.

Entrepreneurial Paths on the App Store

The PocketSuite booking and payments app is built to make it easy for service professionals, either solo or with small teams, to run their entire business. From booking clients and managing payments to invoicing and signing contracts, this app does everything right from an iPhone. Co-founder and CEO Chinwe Onyeagoro, a former management consultant who had transitioned to helping small businesses find funding, saw these businesses weren’t growing because they were always short on cash. “I thought, there has to be a better way for service pros to get paid fast and create recurring revenue — so I went back to my roots as a 7-year-old coming up with ways to make money with friends from a lemonade stand to a babysitting club,” Onyeagoro explains. “I wanted to make it easy for anyone, whether they’re an esthetician, dog trainer, home cleaner, or handyperson, to achieve their goal income so they can live a great life.”
An app illustration of a woman ordering in a coffee shop.

As she shared her vision with her husband, co-founder, and CTO Yang Forjindam, they knew they needed a mobile app where professionals who are away from a desk four to five days a week could manage their whole business. Forjindam, who was an enterprise software architect, explains, “I quickly saw that Apple was the easiest platform to develop on,” and taught himself to do so to launch PocketSuite on the App Store in 2016. The team has since become early adopters of technologies like Apple Pay and EventKit that make it simple to offer smart tools to the app’s users. These tools are part of the robust set of technologies Apple provides to help developers of every size create innovative apps, including more than 250,000 software development building blocks (APIs) and more than 40 software development kits (SDKs) to harness the power of machine learning, augmented reality, and other cutting-edge technologies.

Today, not only has the PocketSuite team tripled, going from seven to 25 team members now spread across the world, but they’re also realizing their vision of empowering people who work for themselves: After just 45 days with the app, the average user sees a 30 percent increase in income.

Launched in 2017, the science-based panic and anxiety relief app Rooted has a simple mission to demystify panic attacks and bring on-the-spot relief to users. As a solo entrepreneur, founder, and CEO Ania Wysocka has relied on a variety of resources to help her further build out the business, including Apple’s Small Business Program. Wysocka describes participating in the program, which offers a reduced commission of 15 percent to small developers, as a positive experience that’s made a huge difference in her growth.

In the last year alone, Rooted has been editorially featured several times on the App Store and experienced a nearly 200 percent year-over-year increase in billings. “When Apple recognizes a small business like me, it’s incredibly powerful — helping us be seen by a larger audience around the world. This audience in turn recognizes the raw quality of Rooted, leaving great user reviews and further sharing the app with others in their network. We’ve had a keyword ranking of #1 for panic attacks and #3 for anxiety in the US, and spent a week as the top health and fitness app in Mexico,” said Wysocka. These opportunities are allowing her to build on organic growth in new global storefronts on the App Store, continuing to improve the app experience for users on the way to reaching her next goals of generating $1 million in revenue and reaching 2 million downloads in what she hopes is the near future. “One thing I’ve learned as an entrepreneur is to have goalposts, and opportunities to stop, reflect, and celebrate as much as you can when you reach them.”

Job hiring platform Chamba identified a different trajectory for success. Launching its first app at the start of 2020, Chamba’s goal is to be able to help as many people as possible find jobs throughout the US. As Latin entrepreneurs, co-founders Diego Montemayor and David Ruiz saw a need to create an employment resource for the Hispanic community, traditionally impacted by high numbers of unemployment. The need for the app became even more apparent as people navigated a fluctuating job market throughout the pandemic, and turned to their phones to find jobs that had previously often come through “word of mouth.” As Montemayor explains, “In early 2020, I was unemployed trying to launch a business when the whole country was laying people off, but thankfully Chamba made it through, and better than that, we’re growing.”

Chamba has quickly gained popularity in cities like Chicago, Dallas, Los Angeles, and New York City, allowing the team to grow from a team of two to 15 full-time employees. In the last year, Chamba has seen 900 percent growth in job seekers. Now, 66,000 active job seekers are using the platform every month to find employment in areas from hospitality to software engineering. Montemayor shares, “It’s been quite the journey. I’m very lucky to be in this position that allows me to help connect employers to employees and serves all of our Hispanic communities throughout the US, which has too often been overlooked.”