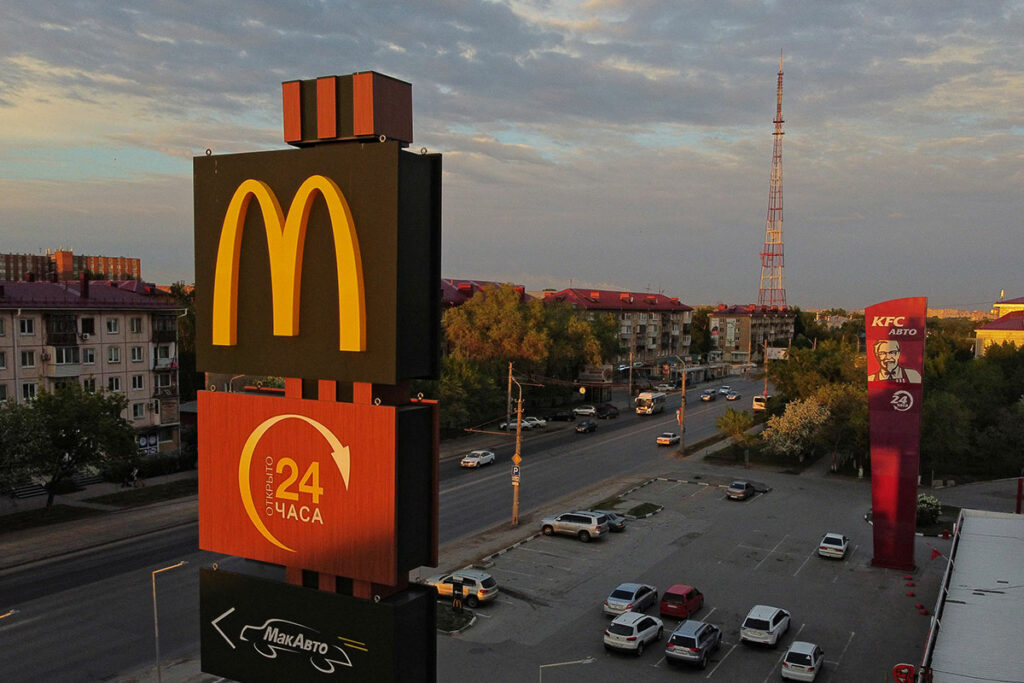 McDonald’s has found a local buyer for its Russian business, after the war in Ukraine pushed it to quit the country.

Alexander Govor, who currently operates 25 McDonald’s restaurants in Siberia, will take on the firm’s restaurants and staff, operating them under a new brand, the fast-food giant said.

It did not disclose the sale price but has warned investors it would take a more than $1bn hit from the exit.

McDonald’s had operated in Russia for more than 30 years.

The opening of its first restaurant in Moscow in 1990 came to symbolize a thaw in Cold War tensions.

A year later, the Soviet Union collapsed and Russia opened up its economy to companies from the West. More than three decades later, however, it is one of a growing number of corporations pulling out as the war in Ukraine and Western sanctions make it difficult to operate.

McDonald’s, which had nearly 850 restaurants in the country, most of them directly owned, said it expected the deal, which is subject to regulatory approval, to close in the coming weeks.

Mr. Govor has been a licensee of McDonald’s since 2015. He is also co-founder of Neftekhimservice, a refining company, and a board member of another firm that owns the Park Inn hotel and private clinics in Siberia.

Russia’s Industry and Trade Minister Denis Manturov said the deal was the result of a “long and difficult” negotiation process and the government would provide Mr. Govor with all the necessary assistance to set up operations.

The terms provide for McDonald’s 62,000 staff in Russia to be retained for at least two years, with their existing pay and Mr. Govor will pay the salaries of corporate staff in Russia until the deal is completed.

McDonald’s will retain its trademark in the country, it said, while the restaurants will be stripped of their menu, logo, and another branding.

“However, we commit to our global community and must remain steadfast in our values. And our commitment to our values means that we can no longer keep the arches shining there,” he said.

McDonald’s suspended operations at the restaurants it owned in Russia in March, citing the “humanitarian crisis” and “unpredictable operating environment” caused by the Ukraine war.

The move drew outrage among Russian politicians and prompted threats the business would be seized.

A patent application for an “Uncle Vanya” restaurant chain was filed with Russian authorities shortly after. The name, the same as the famous work by Russian playwright Anton Chekhov, was one of several brand knock-offs of Western companies to surface.

Last year, Russia and Ukraine accounted for about 9% of McDonald’s revenue.

The move by McDonald’s came after French carmaker Renault sold its majority stake in carmaker Aftovaz to a state research institute for a symbolic sum, while its Renault Russia business was taken over by the city of Moscow. Manufacturing at the Renault plant is expected to resume under a Soviet-era brand.

McDonald'sRebrandingRussia-Ukraine War
Previous ArticleWhatsApp Ramps Up Revenue With Global Launch Of Cloud API And Soon, A Paid Tier For Its Business AppNext ArticleMercedes Just Sold The World’s Most Expensive Car For $142 Million