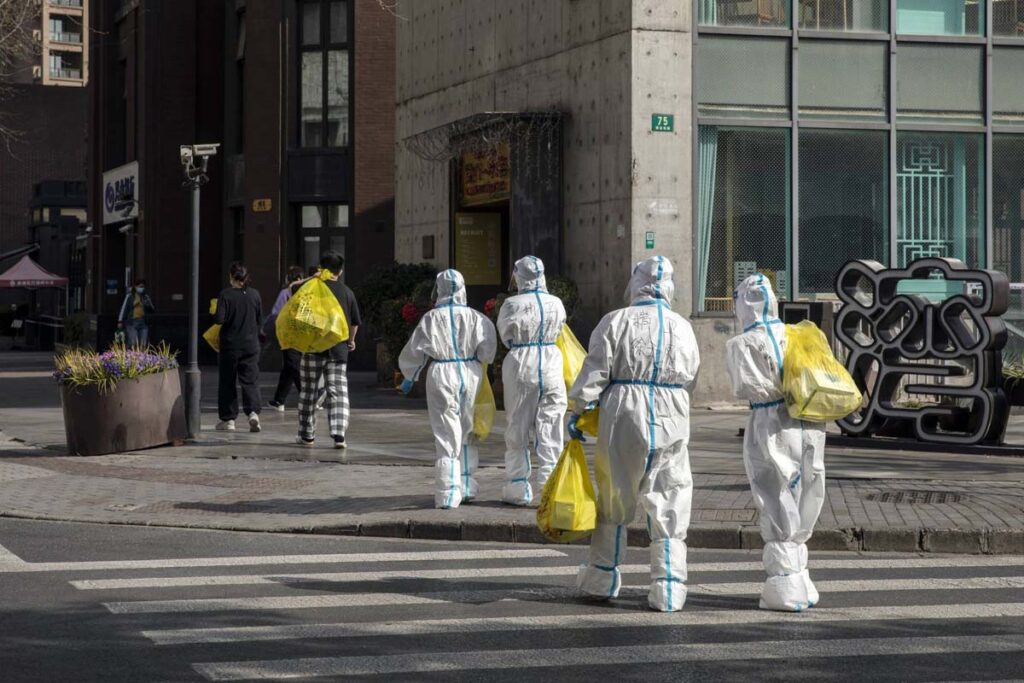 Businesses including Volkswagen (VW) have scaled back their operations in Shanghai, which is being locked down due to a surge in COVID-19 infections.

The German carmaker partially shuttered its factory in the Chinese city on Thursday, citing supply shortages.

More than a dozen companies have suspended plans to list their shares in the major financial center.

Economists are concerned that a slowdown in Shanghai could affect growth in the world’s second-largest economy.

On Thursday, official data showed that China’s manufacturing and services sectors slowed this month at a faster pace than expected.

The National Bureau of Statistics said its purchasing managers’ index (PMI) slipped from 50.2 in February to 49.5 in March.

A reading below 50 represents contraction on the 100-point scale.

PMI data is a summary of market conditions gathered through surveying senior executives in key industries about their expectations for several factors including new orders, production, and employment.

Late on Wednesday, VW said it would partially close its factory in Shanghai due to a “lack [of] parts from suppliers.”

The carmaker shut the factory earlier this month when coronavirus infections were climbing in the city, before restarting production 48 hours later.

Earlier this month, a VW spokesperson said “What we have lost so far in production can be recovered, [for example] via additional shifts, once the situation eases.”

VW did not say how long the latest closure was expected to last and did not immediately respond to a BBC request for further comment.

Its factory in the northeastern city of Changchun has been closed for several weeks.

The STAR Market has been described as China’s answer to New York’s Nasdaq trading platform.

The plans, which were made public in filings to the stock exchange, affect more than $9bn (£6.9bn) in fundraising, Reuters reported.

“There is, without doubt, some uncertainty reflected in these numbers – mainly on supply chains,” she said. “But we are slightly more optimistic than the market in general.”

However, lockdowns in Shanghai and other Chinese cities may ultimately have “little impact” on production, said UBS’ chief China economist Tao Wang.

She said in a research note that most factories were continuing to operate by keeping workers at the factories or shifting production to unaffected areas.

But she added that “logistics delays and port congestion in Shenzhen may have had some temporary impact on trade, especially China’s semiconductor components imports via the Shenzhen-Hong Kong route.”

The lockdown of Shanghai is China’s largest since the coronavirus outbreak began.

Until now, Chinese authorities had resisted locking down the city of almost 25 million people to avoid destabilizing the economy.

It has battled a new wave of infections for nearly a month, although case numbers are not high by some international standards.

Authorities have locked down the eastern side of Shanghai, which includes the city’s financial center, for COVID-19 testing.

The western side of Shanghai is scheduled to go into lockdown on Friday.

This staggered approach means that half of the city will be able to remain open.