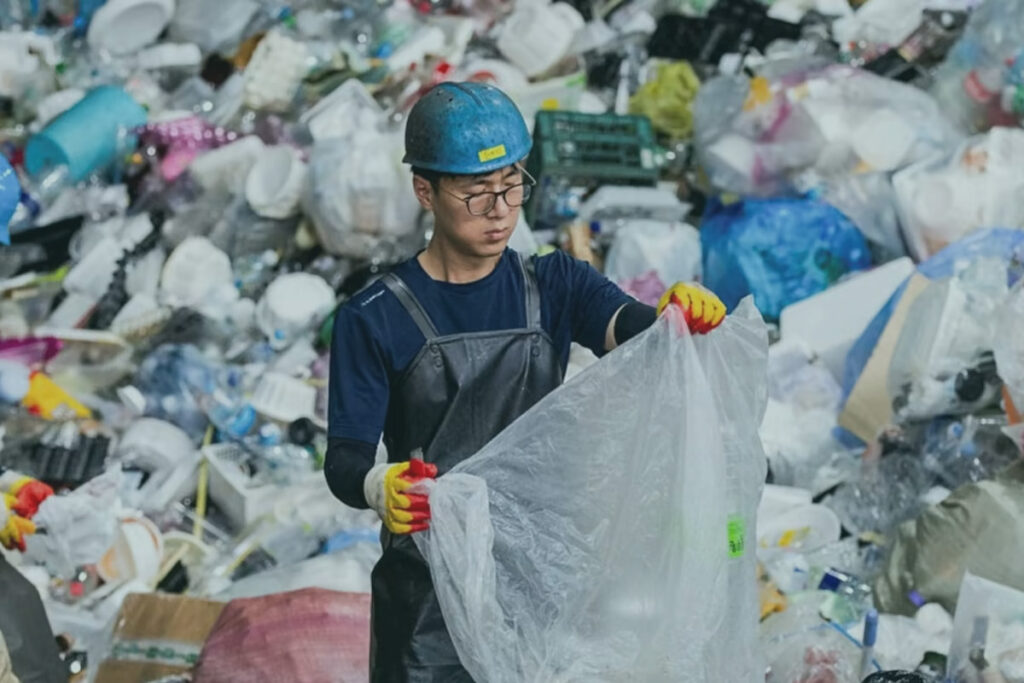 Hur Ji-hyun, a 41-year-old “upcycling” designer in Seoul, is a huge fan of soy milk. But the environmentally-conscious South Korean was always troubled by the fact that each pack of her favored brand came with a plastic straw, which she never used. So, two years ago, she sent a bundle of straws back to the soy milk producer, along with a letter pointing out that many consumers did not need the straws. As she shared her story on social media, many like-minded consumers followed in her footsteps, forcing the country’s two main dairy and soy milk producers — Maeil Dairies and Namyang Dairy Products — to redesign packages without straws for some products. “Many people think their individual voice or action will not make a difference, but it does,” says Hur. “We can easily get united thanks to the internet and social media.” As her story shows, the so-called “zero waste” movement is gaining momentum in South Korea as young consumers and environmental activists pile pressure on companies to reduce plastics as part of their transition towards a greener economy.

Their growing enthusiasm for a green living recently propelled the country to the top of the “green society” category in the Green Future Index 2022, a ranking compiled by MIT Technology Review, a media company affiliated with the Massachusetts Institute of Technology. A high score means the community embraces sustainability through actions such as recycling, ensuring buildings are eco-friendly, and consuming less meat and dairy. South Korea has one of the world’s highest per capita plastic consumption rates. But it also has well-developed waste collection and recycling services, with a recycling rate that reached 68 percent last year, according to consulting firm Frost & Sullivan. Faced with consumer pressure to introduce more green policies, the government announced a plan in 2020 to reduce plastic waste by 20 percent by 2025.

It is also expanding its extended producer responsibility program, which obliges companies to dispose of plastic waste from their products. The scheme has prompted about 10 bottled water producers, including big-selling brands such as Nongshim and Lotte Chilsung, to sell their water without labels so that the bottles are easier to recycle. In addition, Asia’s largest café economy — as South Korea is sometimes dubbed — will make coffee shops charge a refundable deposit for disposable cups from December, after banning the use of plastic cups for dine-in customers in 2018. “This will be our first step to upgrade our waste management system that other countries can benchmark,” says Hong Su-yeol, who runs Resource Recycle Consulting — and is better known as “Dr. Waste” in South Korea.

Hong says consumers’ environmental awareness has sharply increased since a Chinese ban on waste imports in 2018 forced South Korea to manage significant volumes of plastic rubbish at home. “It was a wake-up call for many people and has sparked a grassroots movement against plastic waste,” he says. This has achieved many “small victories” against consumer goods companies. Hur, for example, repeated her soy milk tactic with food company CJ CheilJedang, forcing it to remove plastic caps from some of its ham products designed for traditional holidays. Similarly, Brita Korea became the first Asian subsidiary of the German company to collect water filters for recycling after consumers sent hundreds of them back to the company. Campaigners have also targeted cosmetics manufacturers, including AmorePacific, whose representatives pledged last year — following a protest held in front of its Seoul headquarters — that it would strive to eliminate non-recyclable packaging by 2030. Meanwhile, Starbucks Korea announced last year that it would make every store plastic-free by 2025 — the chain’s first move of this kind.

A further sign of consumers’ growing eco-consciousness is the nationwide proliferation of zero-waste shops, where customers bring their own containers for products ranging from shampoo and detergent to olive oil and coffee beans. Ko Kum-sook, who runs one of Seoul’s 200 zero-waste shops, says about 80 percent of her customers are women in their 20s and 30s. “They are the generation most interested in ethical consumption while Korean society, in general, is still focused on economic efficiency.” A recent survey by the Korea Chamber of Commerce and Industry found that 65 percent of South Korean millennials and Generation Z — born, respectively, between the early 1980s and mid-1990s, and the mid-1990s and early 2010s — are more concerned with ethical consumption than price. This contrasts with the previous generation’s preoccupation with price. But this eco-consciousness appears to have limits. Plastic use surged during the pandemic, as people turned to online shopping and takeaways. And, although some progress has been made on the retail front, South Korea’s export-driven economy remains largely dependent on carbon-intensive heavy industry and manufacturing.

“People are not discussing fundamental solutions such as accelerating industrial restructuring or expanding renewable energy production, [because they are] concerned about the huge transition cost and potential job losses,” Ko says. “No one wants to endure the pain.” Activists warn that the country still has a long way to go to achieve its goal of becoming carbon neutral by 2050. They warn that, while the campaign to reduce the use of plastics is helping reduce greenhouse gas emissions, it is a drop in the ocean in the fight against climate change. They are also concerned the country’s new conservative president, Yoon Suk-yeol, who has emphasized his business-friendly economic policies, could roll back environmental regulations. “The environment policy is likely to go backwards under the new administration,” says Heo Seung-eun at Green Korea, an environmental activism group. “Companies need to think more about recycling from the production stage, but changes are coming slowly, compared with consumers’ enhanced environmental awareness.”