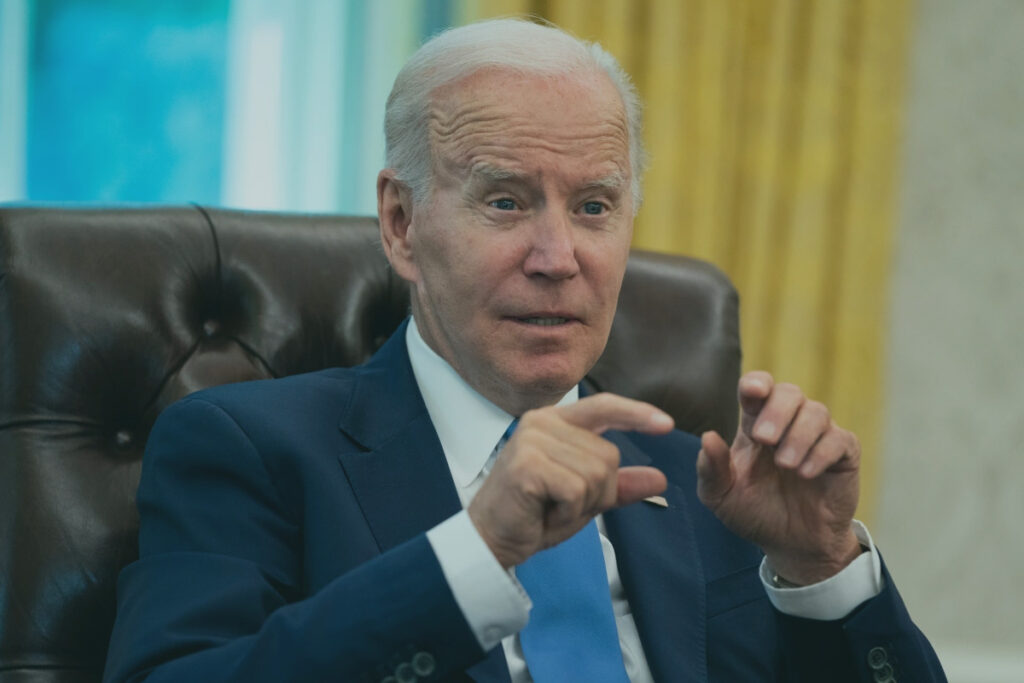 President Biden’s hands-off approach to fighting the highest inflation in four decades poses major risks to the economy and his political fortunes.

Biden made clear earlier this month he will do nothing to push the Federal Reserve away from hiking interest rates as high as possible to curb price growth. But as the Fed picks up the pace of rate hikes, economists fear the bank will be forced to trigger a recession as it struggles to fight supply shocks beyond its control.

“High inflation is a big problem. The Fed showed us again yesterday by raising rates that they are working on getting it down as quickly as possible without causing a recession,” wrote Claudia Sahm, a former Fed research director and author of Stay-At-Home-Macro, in a Thursday analysis.

“But that’s a tall order, and its tools cause pain, too.”

The Fed is the federal government’s primary inflation fighter and obligated under federal law to ensure prices stay stable while keeping the job market as strong as possible. The bank’s main weapon against inflation is raising its baseline interest rate range, which increases borrowing costs throughout the economy.

In other words, prices begin to plateau and eventually fall as fewer people can afford to pay them.

Economists generally agree that higher interest rates are needed to curb a glut of consumer demand driven partly by the Fed’s refusal to raise interest rates earlier. Trillions of dollars of stimulus deployed by the Trump and Biden administrations also helped fuel some of the current inflation.

“We feel that there’s a role for us in moderating demand. Those are the things we can affect with our policy tools,” said Fed Chair Jerome Powell on Wednesday, shortly after the bank announced its steepest rate hike since 1994.

But Powell also warned about the potential implications for the economy as the Fed also tries to fight inflation driven by supply shocks beyond its control.

Rate hikes will not boost the global supplies of oil, wheat, fertilizer and other crucial commodities depleted by the war in Ukraine and sanctions on Russia. Steeper borrowing costs will also not move China from its economically damaging COVID-19 containment policy, which has caused inflationary supply shortages, backlogs and delays.

With inflation already at 40-year highs, Powell said the bank would still keep hiking interest rates until the shocks began to dissipate and headline inflation numbers started to decrease —regardless of how weak it could make the U.S. economy in the meantime.

“We never think too many people are working and fewer people need to have jobs, but we also think that you really cannot have the kind of labor market we want without price stability,” Powell said.

“We’d love to get back to that place. But to get there, it’s not going to happen with the levels of inflation we have,” he continued.

Powell’s warning deepened concerns among investors and economists that the Fed would be forced to induce a recession as forces beyond its control boost inflation. An accelerating selloff in stock markets, surging gasoline prices, soaring mortgage rates and a sharp downturn in housing market activity have all taken a serious toll on consumer sentiment and boosted the risks of recession next year.

Josh Bivens, director of research at the Economic Policy Institute, argued that the Fed’s best move is to wait to see if the shocks dissipate and not to tighten too fast.

“…If you look at the sources of inflation, it continues to be the shocks, which they can’t do anything about like the oil and food shocks that are just global markets and nothing the Fed can do to push back against those,” he said. “In the sense, if we don’t get any more shocks, I think we’ll have inflation start to head down in the next six months if we don’t do anything to make unemployment rise or make the economy a little more slower.”

The White House has attempted to squash concerns that a recession in the future is not unavoidable.

“First of all, it’s not inevitable,” Biden said in an interview with The Associated Press. “Secondly, we’re in a stronger position than any nation in the world to overcome this inflation.”

Bivens argued that the White House is right in saying that a recession isn’t inevitable, citing low unemployment and relatively strong household balance sheets compared to the financial crisis in 2008.

“I think the fact that the recession is inevitable is really overstating it. I think there is a lot of strength in this economy if we can get past the global shocks,” Bivens said.

Biden’s comments echo messaging from the White House that inflation is a global problem, but the U.S. is well-positioned to deal with it before a recession is imminent.

“We know that families are concerned about inflation in the stock market. That’s something that we are aware of. But… what we’re facing are global challenges: Putin’s price hike, inflation, coming out of a once-in-a-generation global pandemic,” she added.

Biden’s approval rating dropped for its third straight week this week, polling below 40 percent in recent surveys. The poor scores from the public indicate that Americans are focused on soaring costs.

The price increases also spell trouble for Democrats just months before the 2022 midterm elections where party control of the House and Senate is at stake.

“Every President does his best to be the optimist-in-chief … and most voters get the joke,” said Bruce Mehlman, former assistant secretary at the Commerce Department under President George W. Bush.

“A recession would hurt the Democrats because recessions are bad for voters, not because the president refused to declare one inevitable,” he added.

Biden, in the interview with the AP this week, also addressed the sour mood of the public amid high inflation and the rising cost of goods and gas.

“They’re really down,” he added. “Everything they’ve counted on upset. But most of it’s the consequence of what’s happened, what happened as a consequence of the COVID crisis.”

While a growing portion of the American public believes the U.S. is currently in a recession, most economists don’t expect one to arrive until next year at the soonest. The unemployment rate is still 3.6 percent, a shade higher than the 50-year low seen before the pandemic, and consumer spending has remained resilient in the face of high inflation.

“We’re not seeing a broad slowdown,” Powell said Wednesday. “We see job growth slowing but it’s still at quite robust levels. We see the economy slowing a bit but still at healthy growth levels.”

But Ian Shepherdson, chief economist at research consultancy Pantheon Macroeconomics, said Powell’s approach was “alarming” because inflation may already be well on its way downward by the time the Fed sees evidence of it coming down.

“If you keep hiking until inflation is coming down, you have overtightened. Whether that means a recession follows will depend on the resilience of the private sector,” he wrote in Thursday research note.

“Still, the risk of recession is higher than before [Wednesday’s] meeting, because the Fed expects to hike so much further, and more rapidly, than previously.”