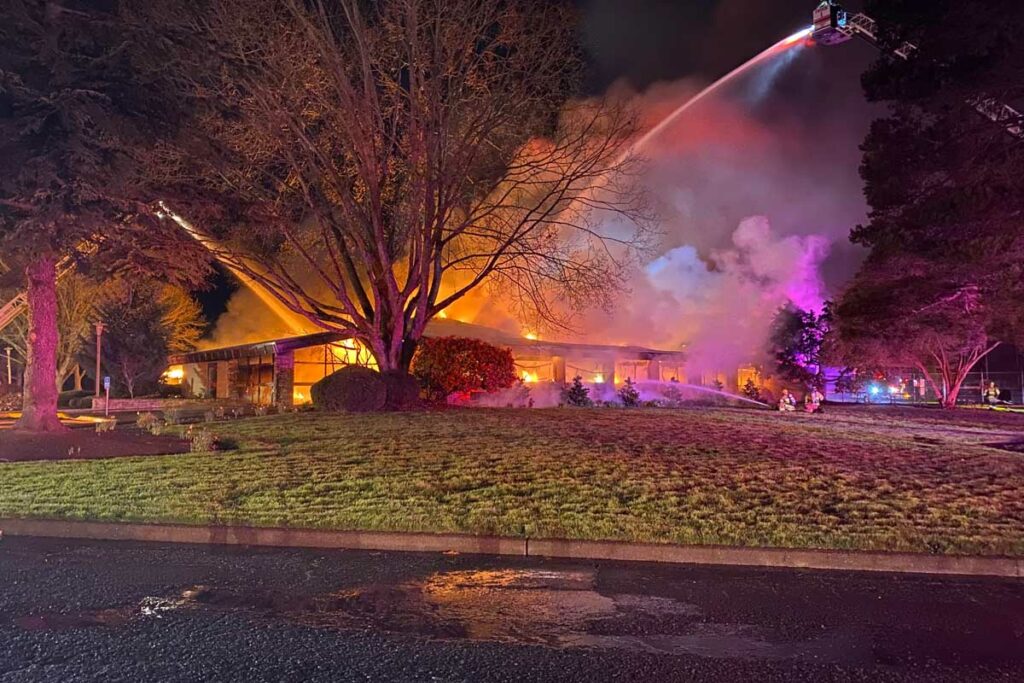 A two-alarm fire destroyed a Newberg dental business, DC International/DC Edge, early Sunday morning.
The blaze was reported shortly after 2:30 a.m. at the business, 305 N. Springbrook Road. The first arriving Tualatin Valley Fire & Rescue (Newberg) crews found the single-story structure fully involved in flames.
Firefighters began an aggressive fire attack measure to keep the flames contained to the one structure, preventing any spread to other nearby facilities.
Due to the significance of the fire and rapid spread throughout the large commercial building, the incident was upgraded to a second alarm, adding more resources from Tualatin Valley Fire & Rescue and neighboring fire agencies.
It took firefighters about two hours to gain control of the blaze. Crews continue to extinguish hot spots throughout the structure. The commercial building is a total loss.
The cause of what started the fire is unknown. Investigators were on scene throughout the day.
Tualatin Valley Fire & Rescue was assisted by the Dayton, Dundee, McMinnville and Yamhill fire agencies, in addition to the Newberg-Dundee Police, Yamhill County Sheriff’s Office, Newberg Public Works, Portland General Electric, NW Natural and the Oregon Department of Transportation.
DC International/DC Edge DCI is an industry leader in manufacturing dental equipment, components and replacement parts, according to its Linkedin page.
The family-owned business has been in operation for more than 30 years. It sells products domestically and globally in more than 60 countries worldwide.
The company posted the following message on the page following the fire:
“With heavy hearts, we share the news that our parts assembly building experienced a fire on Sunday, April 10th. This building housed our DCI Parts division for over 30 years and proudly shipped out millions of parts orders.
“Fortunately, DCI occupies ten buildings, and most of the parts inventory is stored in a different location, not impacted by the fire. We are certain we will be up and running quickly.
“Our employees and customers are our priority. Everything we do is focused on making our customer’s life easier. The DCI team will continue to work through this issue to serve our customers.”