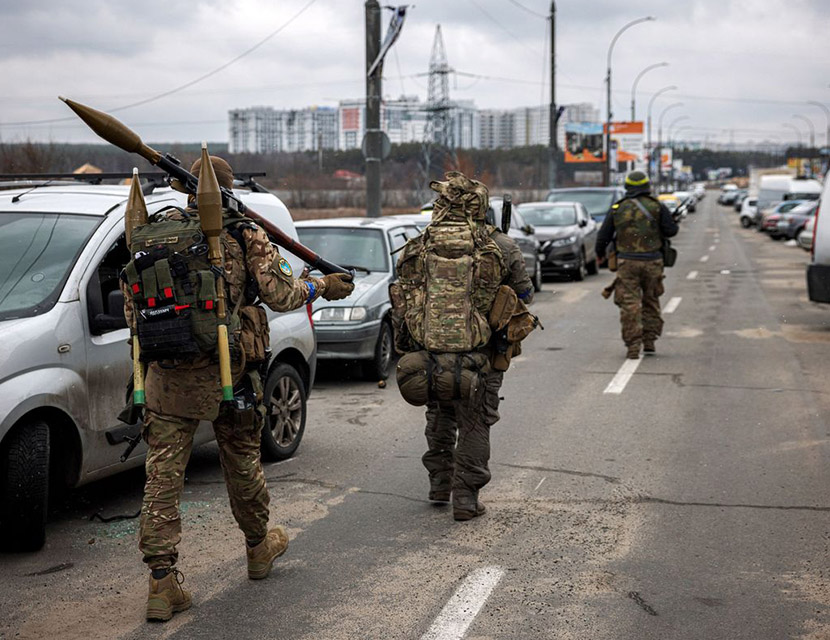 U.S. officials say Russia has asked China for military assistance for its war in Ukraine, an unusual request that suggests Vladimir Putin has faced more setbacks than he imagined in his invasion.

A U.S. official, speaking on condition of anonymity to discuss delicate matters, did not specify what kind of equipment Moscow had requested from its most powerful diplomatic partner. The official declined to say how the administration knows these details. Another U.S. official said the request is not new, and was made just after Russia’s Feb. 24 invasion. White House spokespeople declined to comment.

It’s part of the Biden administration’s ongoing pressure on Beijing to exert its influence on Putin to end the crisis and was arranged before news of Russia’s outreach to China spilled into the public sphere. The Russian Embassy in Washington didn’t respond to a request for comment on Sunday.

As the conflict extends into its third week, Putin’s campaign has run into difficulties. The question is whether it’s in President Xi Jinping’s interest to engage with any Russian weapons request and set off China’s biggest foreign policy shift since Richard Nixon’s visit in 1972.

Xi has tried to thread a needle in neither condemning nor supporting Putin’s actions. But while Russia sells far more arms to China than it buys, Beijing’s rapid military modernization has seen it produce more advanced weapons in recent years.

Sending weapons would risk severe economic penalties on Chinese companies and a big escalation in trade tensions with the U.S. at an extremely delicate time.

As the most powerful Chinese leader in decades, Xi is consolidating power and has made stability a priority ahead of a once-in-five-year party congress later this year at which he’s expected to secure a third term in office. China has said it wants a quick resolution to the war, and there’s no indication it wants to help prolong a conflict that is severely hurting financial and energy markets.

Liu Pengyu, the Chinese embassy spokesperson in Washington, said he was unaware of any suggestions that China might be willing to help Russia: “China is deeply concerned and grieved on the Ukraine situation. We sincerely hope that the situation will ease and peace will return at an early date.”

The Biden administration believes China was aware before the invasion that Putin was planning something, Sullivan told CNN on Sunday, a claim Beijing has denied.

The U.S. is now watching whether China provides material support or economic support to Russia. “It is a concern of ours,” Sullivan said. “I’m not going to sit here publicly and brandish threats, but what I will tell you is that we are communicating directly, privately to Beijing.”

Beijing stopped short of condemning Russia for its actions in Ukraine but also called repeatedly for negotiations toward a cease-fire and a resolution of the conflict. When Russia annexed Crimea in 2014, China officially stayed neutral.

While China has continued to provide diplomatic support to Russia after the invasion, including amplifying a conspiracy theory about U.S.-operated biolabs in Ukraine, Beijing officials have also expressed concern about civilian casualties, vouched for Ukraine’s sovereignty and stepped up diplomacy with European nations while calling for peace talks.

President Joe Biden’s top advisers want China to enforce sanctions on Russia’s economy imposed by the U.S. and its allies and officials see no evidence that Beijing has tried to circumvent them.

The last time Sullivan and Yang met, in Switzerland in October, they discussed areas of mutual interest such as climate change, as well as areas of friction — including human rights concerns in Hong Kong and disputes over Taiwan and the South China Sea.

Now the stakes are significantly higher. Just weeks before the invasion, Putin and Xi declared in a lengthy joint statement that the two nations’ friendship had “no limits.” What China knew of Putin’s intentions will be an important backdrop to the Rome conversation.

“We believe that China, in fact, was aware before the invasion took place that Vladimir Putin was planning something,” Sullivan said on CNN. “They may not have understood the full extent of it because it’s very possible Putin lied to them the way he lied to Europeans and others.”